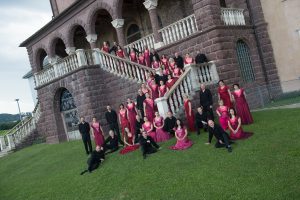 Most members of the Cantemus Mixed Voice Choir were pupils of the Kodály Zoltán Primary School. Today they are university students or working professionals whose lives all share a common interest – Cantemus.

The choir – founded by Dénes Szabó – initially came together only to rehearse and perform on special occasions (one of which was a performance of Spem in Alium by Thomas Tallis) and eventually began to work independently in 1998 under the baton of Soma Szabó.

The choir performs representative pieces from the ’a capella’ and oratorical choral repertoire from the times of the Renaissance to the music of contemporary composers. The choir’s first CD recording – published in 2006 – was a performance of the complete Vespers by Sergei Rachmaninov.