The Pro Musica Girls’ Choir has been considered one of the leading choirs in the world since they won their first international competition in their foundation year. As international ambassadors of the success of the Kodaly music education method they are sought after not only as performers at the highest level but also as participants in music education conferences and masterclasses.

The uplifting experience of choral life which the girls had worked through and enjoyed as pupils at the Zoltán Kodály Primary School in Nyíregyháza and the enthusiasm for singing that they had gained from this were the legacy which led to the founding of a choir for ‘old pupils’ in 1986. Since then they have won first prizes and ‘Grand Prix’ (overall competition prizes) at leading international choir competitions. Their greatest successes have been the European Grand Prix which they won in their 10th year, the title of ‘Olympic Champion’ in two categories at the Busan Choir Olympics held in 2002 (where they also won three first prizes in separate categories) and the first prize – the Silver Rose Bowl in the BBC’s world invitation international competition ‘Let the Peoples Sing’ in 2004.

The choir’s repertoire is rich and varied — extending from the Renaissance to contemporary choral music. It includes leading Renaissance and Romantic period pieces, works of Bartók and Kodály and works by contemporary Hungarian composers as well as folk music arrangements from Hungary and other countries. The choir has premiered many works and also performs pieces intended for entertainment.

In addition to the many competitive prizes and other tributes the choir has received over the years it has also received two prestigious national awards for achievement in the arts shared with the Cantemus Children’s Choir – the prize of the Foundation for Hungarian Heritage and the Bartók Béla – Pásztory Ditta Prize.

The choir has been conducted since its inception by Dénes Szabó. 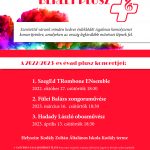