’Behind every successful man there is a woman’ – as the saying goes. When the achievements of successful people are accounted the fact that in addition to their own special qualities and motivation they can also attribute their success to the continuous support of a companion is often unjustly overlooked.  As part of marking the occasion of the 45th anniversary of the foundation of Cantemus I’ve interviewed Dénes Szabó’s beloved wife Ágnes. 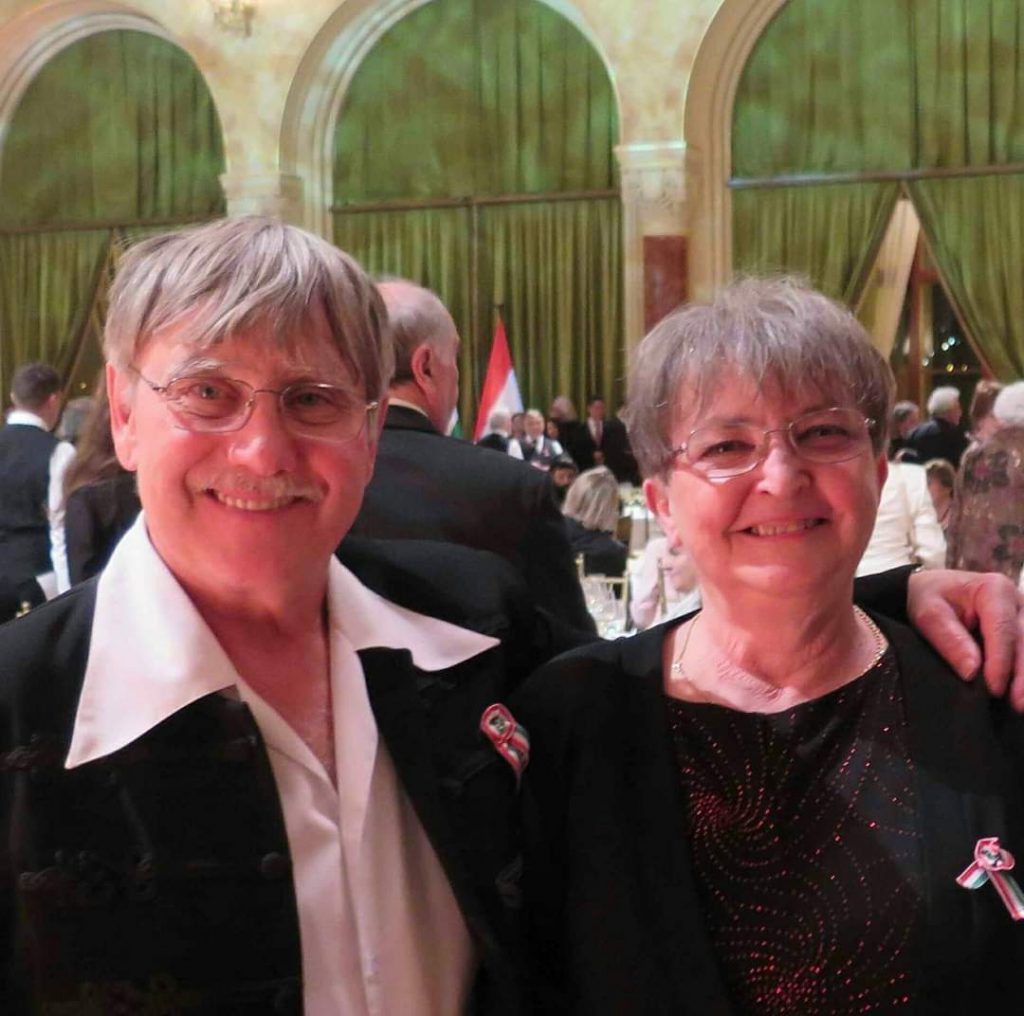 Dénes has often mentioned that both of you went to the same college in Miskolc. What’s more you both graduated – having done other studies – as flautists. What were the things that first pointed  you in the direction of music and -within that –  the flute. Did you always want to become a flautist?

I come from Diósgyőr, so I began my musical studies in the Miskolc music school and continued  in the conservatoire there. My story is unusual. My teacher at the music school saw potential in me and thought I would do well in the conservatoire so after a successful entrance exam I started my studies in music theory at first. However, during my first year a need for volunteers to learn how to play the flute arose as the college students doing their flute teacher training had nobody to complete their teaching practice with.  A classmate and I decided to take the opportunity to learn another instrument and we ended up working with the student teachers all the way through to their graduation. The following year I decided to stay on at the college and carry on with studying the flute which eventually resulted in myself also becoming a flute teacher.

When did you and Dénes first meet? What is the story of you two getting together? 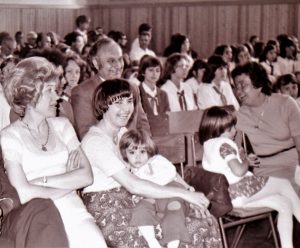 Dénes says it all started a few years before he entered the Miskolc college. There was an international flute competition at the Academy of Music in Budapest and young students of the flute who were interested were allowed to attend and listen. According to the family story Dénes spotted me there for some reason and when he was taking his entrance exam in Miskolc he was taken aback to notice the same girl there,too.  Then our relationship gradually developed over the three college years.  We both found that we liked each other’s company. Looking back I’ve realised that I learnt an awful lot from him in those years about music, human relationships and also ways of thinking about life in general. We didn’t find it hard to follow the ’order’ of one of our friends who said: ’Dénes,  engagement in August, wedding in September  and get started in Nyíregyháza!  And that’s what happened.  We were married by Dénes’s uncle in Tiszanagyfalu in 1969.

So you moved to Nyíregyháza… How do you remember those times? Wasn’t it hard to leave your birthplace?

We were told that there were two vacant positions available for flute teachers here – that was the bait. We came and had our first interview with the head of the music school who said that they had no jobs for flute teachers but  there was one to teach music theory and there was also a music specialist primary school in town which was looking for a class music teacher. We decided to change tack having made our minds up to start out in Nyíregyháza and with Dénes taking the harder job of primary school class teacher we got going.

Simultaneously with the arrival of your children the choir was also born. An extraordinary life started as the Cantemus success story began to unfold in the mid-seventies. How did you manage to juggle your profession with the jobs around the choir and your family? Did you have help?

Our life together had an exciting start. We stayed in a rented flat and were trying to get to know our new environment.  Teaching itself was novelty. We were lucky though to receive much kindness and friendly guidance from the new people around us. After our wedding in September we had our first child – Barbara – the following July and subsequently Soma in four years’ time. In the meantime Dénes took part in ’defending our homeland’ – completing his two year conscript army service.  We didn’t have an easy time living in a flat on one salary but we were lucky to be able to always rely on our parents’ support despite the physical distance and we also had help from our friends. The intensive work with the choir really began after Dénes had finished his military service. 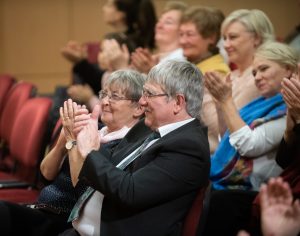 certain about: the children, our colleagues, our  headmasters, our extended
friends’ circle and I mayself all saw and believed that what he was doing was good. To support that as his wife and be part of it also as a helper was easy and obvious to me.  To have been a natural part of the past 50 years has been and will remain a great gift. I thank God for the beautiful life I’ve been given.

You were always fully involved with the choir and had a lot of related jobs. You were not only a caring partner but also a surrogate mother to a lot of singers. Is it at all possible to sum up how many things you did within and related to the life of the choir?

’Everything that was necessary’ she laughs. If you do something you like doing nothing related to it is a chore or a burden but rather the opposite. The joy of being able to do things to help someone you love makes everything a lot easier. After a while it became a must to look after the children’s concert clothes, document every event and take photos. However, luckily, it wasn’t only me who supported the choir’s work selflessly and full heartedly and contributed to the success of what we are celebrating now thus aiding Dénes’s work as well.  A successful concert and bright eyes filled with the thrill of a really good performance dissolve all tiredness. What remains permanently with you is memories of good times.

How do you two relax? Does something called free time exist for you?

When our children were young we didn’t have as many concerts as we do today. But I still remember holding them in my arms at concerts. Was it a good idea or not? I don’t know. I might do the same again today. However, we regularly found time as a family to play, go on outings and collect bugs, chase butterflies and swim in the Tisza river. We frequently went on 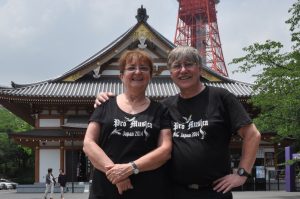 camping holidays by the Tisza. For us fresh air and the outdoors were a welcome escape from the concrete block we lived in. Our two children didn’t get the chance to enjoy a house with a garden and play outside in the fresh air. Our four grandchildren are luckier, they can run around, jump about and splash around freely in our garden now and this makes us happy too, it’s like a ’sanatorium’ in a way. We never had regular summer holidays but we travelled a lot with the choirs. Initially I found the tours very demanding. I was constantly fretting about whether we could keep 60 children together when boarding a tram or a train. There were times when the first time I saw the sights of a city we had visited was only after we’d returned home. When touring gradually became easier in terms of convenience and I also gained more experience it all became less stressful.  However, I still say that touring with a group as one of the leaders is great responsibility.

What is your favourite memory from the past 45 years?

My most exciting experience was the trip to Venezuela in 1983. The whole continent of that country was so distant and unreachable in those days that we couldn’t even imagine what it might be like – it was an entirely different world. Later I had the opportunity to go touring in America and Australia – not to mention Japan. The concerts in the halls in Japan are definitely the highlights of the time I spent with the choirs – especially those when I had the chance to sit with the audience and just listen.  I cherish some unforgettable moments. 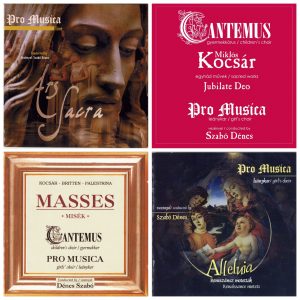 Having passed your golden wedding anniversary how would you describe the secret of your marriage? Where does the secret lie?

I like reading. These days I can also find the time for it. Recently I’ve found some beautiful and also useful and thought provoking lines in my readings which I could have used to be my mottoes over the years – like the one below which is a symbol of devotion to God but it could also sum up my life – the life I’ve lived with my husband, my family and all that I liked doing within it because love is a sustaining force – the source of joy and happiness.

In the words of András Simon:

’Love is not simply an emotion but a conscious decision.  It is a sustaining faith which forges an unbreakable unity. Those who decide not to avoid It become a healing sign in a world which is falling apart.’

Full album from this article