The story of the Cantemus concert dresses

During the past 45 years of the life of Cantemus the stage appearance of our choirs has always played an important role. The precious concert attires worn by our choir members at various performances have always been custom made with the greatest care and professionalism by both the designers and the dressmakers. These dresses also represent certain periods in the choirs’ history and are filled with many cherished memories.

Until 1976 the uniform appearance of the choir was created by the children wearing the traditional young pioneers’ uniforms.

By 1976 the choir was at performance level and ready to be given proper stage attire to wear. This wasn’t customary for children’s choirs at that time so the choir was immediately met with exuberant enthusiasm right after the first performance in their new and decorative dresses. The designer who dreamt up that first outfit- suitable for any stage in the world – was called Julika Oláh and it was she who decorated the waistcoats with Hungarian style embroidery. The navy wraparound skirts were also made of good quality material and their versatility has kept them in use for year group concerts to this day.

The choir was preparing for a concert tour in Venezuela in 1983. The climate there presented us with the need for a lightweight, airy and not too warm to wear costume. With the help of seamstresses specialising in folk art white blouses with red embroidery were made with skirts to match. The costume was worn with white ballerina shoes and was received with great success in Venezuela.

The choir first appeared on stage in these beautiful Hungarian folk style dresses  –  designed by Anna Gisztl –  in 1993 when on tour in the USA and Canada. There are no two identical dresses because every single one is embroidered with a different pattern. However, this has never harmed  the choir’s unified  look. The dresses are worn with traditional Hungarian style short sleeve white blouses and black shoes.

This dress is the most well known and also the most definitive costume of the Cantemus Children’s Choir having been worn for many 1st prize winning competition performances and major concerts.

In 2014 the need arose to rethink the white dresses. The new white dresses – designed by Mónika Mallár – were premiered in Korea. 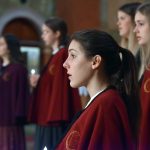 The idea of the cape was conceived at the time  of Advent and Christmas concerts. As most of these concerts have usually taken place in winter in cold churches these decorative  overgarments have been  used to keep singers warm. 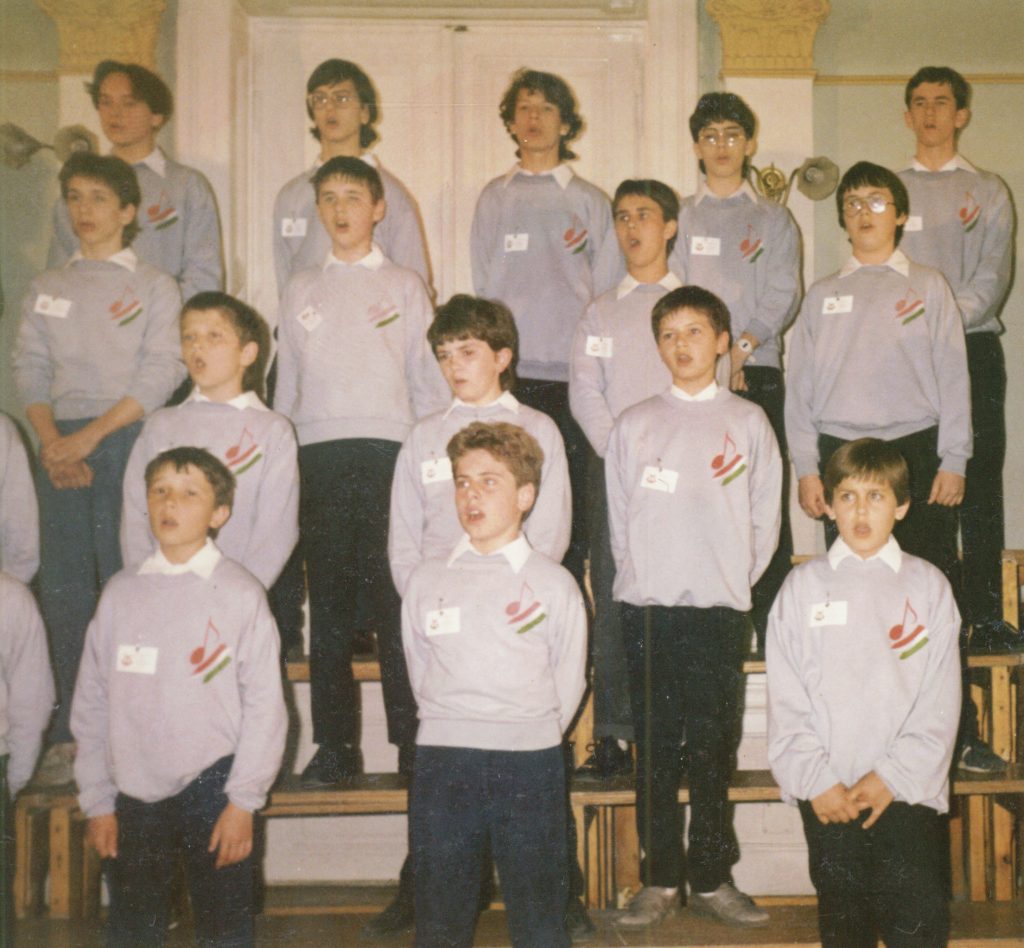 The jumper in the first years

At the beginning of the 1990s the boys used to wear jumpers embroidered with music notation symbols in our national colours.

By the time the boys started winning international  awards and prizes their appearance also represented Hungary in the style of the white shirts and waistcoats traditionally worn by village lads.

The dresses of the Pro Musica Girls’ Choir

The long black skirt with the white blouse

The Pro Musica Girls’ Choir was formed to fulfil the wish of girls who had grown out of the Cantemus Children’s Choir but wanted to carry on singing together. At the time of this formation they were preparing for the Bartók 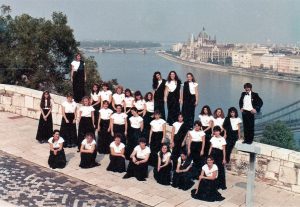 International Choir Competition in Debrecen and needed something new to wear for their first appearance as a different choir . The long black skirt with the white boatneck blouse worn with the school badge  seemed an appropriate and easy solution. The girls were first wearing the new set for their competition performances and subsequently when they were presented with their category’s 1st prize and eventually the Grand Prix of the competition. The dress was later modified slightly by changing the simple top to  a more elegant blouse with a rose brooch.

The 1994 concert trip to Japan brought a new need for a  stage dress of eye-catching beauty for the girls. The aim with the new style dress – designed by 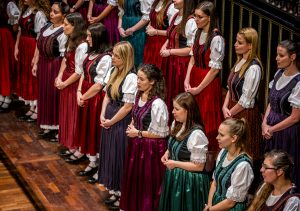 Anna Gisztl –  was to provide a close enough match with the old new wives’
dresses of the Cantemus children so that senior members of the latter could be mixed with the Pro Musica girls on stage still endeavouring for a reasonably unified appearance. The idea materialized in the silk new wives’ dresses. Pro Musica was first shining in the individually embroidered silk dresses in Japan in 1994 and subsequently at many concerts and competitions including their European Grand Prix winning performance in 1996.

The golden dress was also premiered in Japan – born of the need for dresses more suited to church performances than the silk wives’ ones. We owe the design of really special beauty to Mónika Mallár. The girls wearing gold also brought a lot of gold for the institute including 3 gold medals in addition to two Champions’ titles at the South-Korean Choir Olympics in 2002 and the top award of the ’Let the Peoples Sing’ BBC international choir competition.

A visual expression of the angelic voices of the Pro Musica girls was created when another new costume came to life. Mónika Mallár designed a dress of exceptional beauty which contributes to the girls’ voices being able to create a special atmosphere with their singing.  The dress was first worn by  Pro Musica in Japan in 2006 and has become a regular feature of the Christmas concerts. 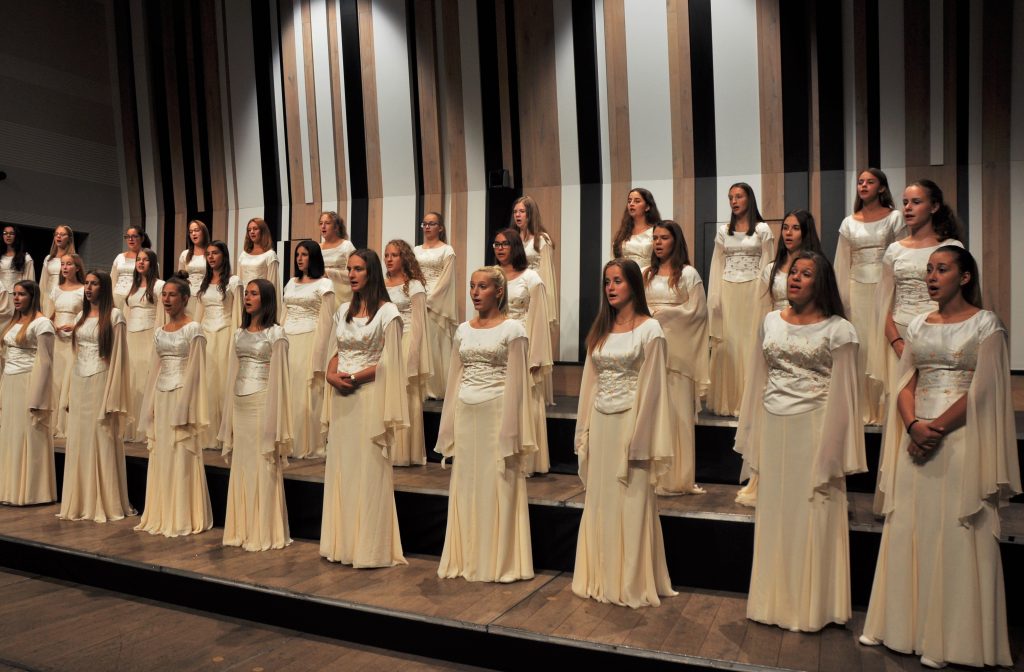 The blue and green dresses and dinner jackets 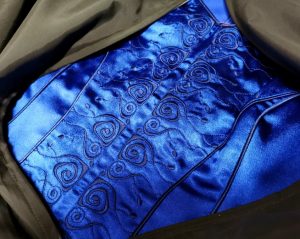 Following the foundation of the Cantemus Mixed Voice Choir  in 1988 its first significant competition win   – the Grand Prix of the Budapest International Choir Competition – still found the ladies in the silk Hungarian style dresses. The audience first saw the ladies’ new green and blue dresses –  also designed by Mónika Mallár – in 2003 on the occasion of the Mixed Voice Choir’s qualifying concert.

The red dress and dinner jackets 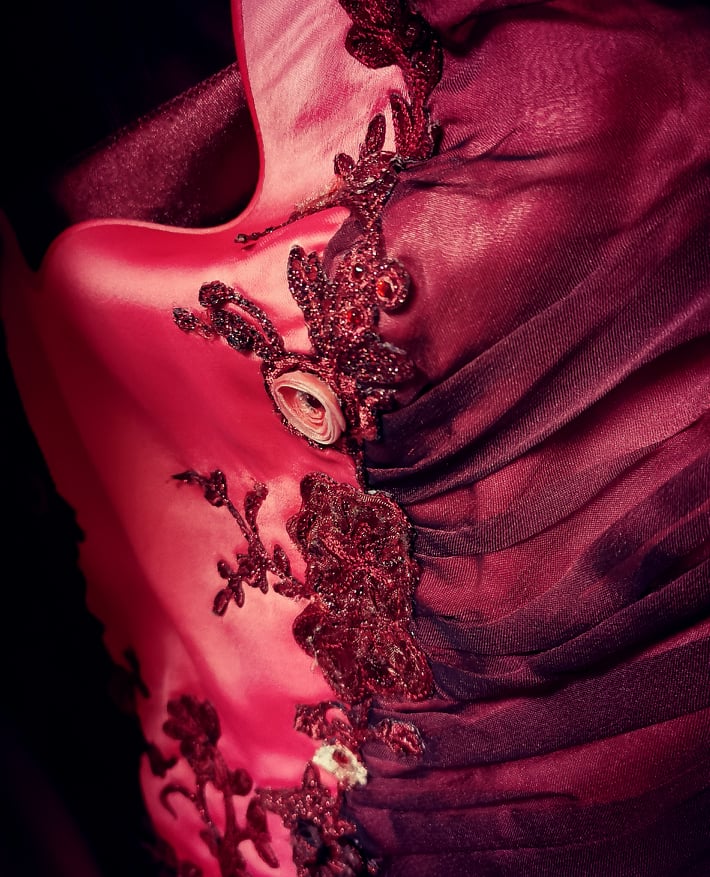 The year 2017 put  the next new design of Mónika Mallár’s  custom made decorative dresses on stage . The new outfit also appeared in the cover photo of the choir’s recording made that year in Austria

The appearance of folk dress on stage is a beautiful memory in the history of the mixed voice choir. One of the repertoire pieces of the Mixed Voice Choir when preparing for the Gorizia International  Choir Competition  in 2006 was Kodály Zoltán’s  Mátrai képek ( Scenes from life in the Mátra

mountains) which called for a traditional folk style appearance .  Based on expert advice by the head of the dance department of the High School of Arts in  Nyíregyháza (Zsolt Szilágyi) and one of their teachers who is also a choir member (M. Nagy Andrea) the Mixed Voice Choir was provided with authentic traditional folkdress drawn from four different regions of Hungary. To be dressed in that outfit has a special feel and meaning. It is a certain kind of ritualistic act for the choir members to help one  another create the most aesthetic and dignified stage picture representing traditional village scenes. Beyond the authenticity of  the appearance wearing these outfits also represents togetherness and unity. That feeling in the members’ hearts was reflected in the choirs’ competition performances in Gorizia in 2006 so strongly that the choir won  first prizes in four categories and also the Grand Prix, the Audience Prize and the Special Prize of the competition. 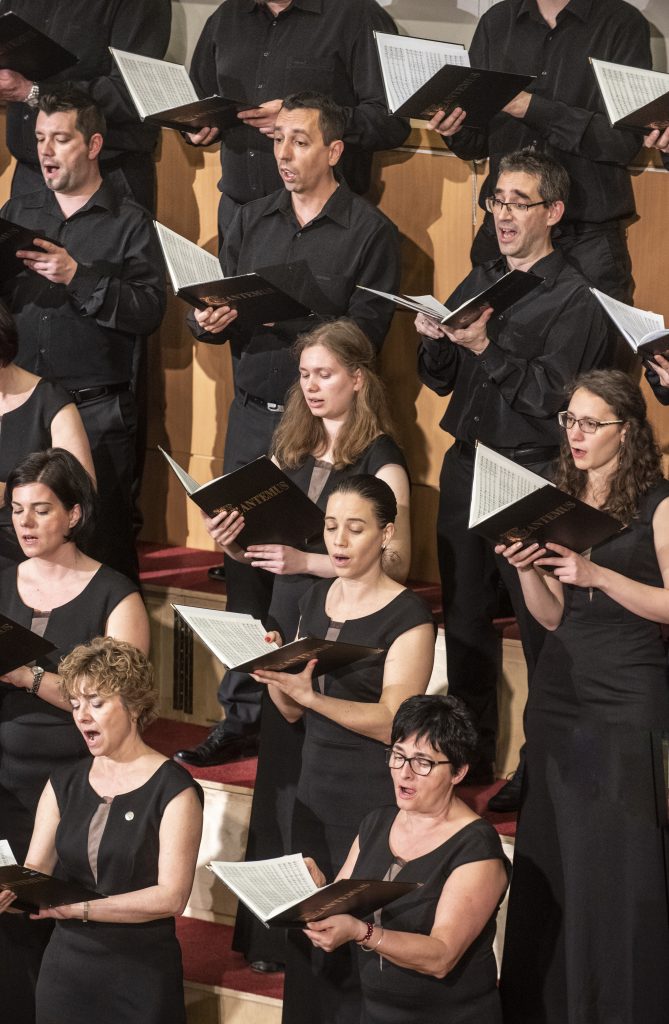 Due to a lot of participation in oratorical performances the choir began to need a simple but stageworthy uniform. This materialized in a custom designed black dress for the women and a simple smart black shirt with black trousers for the men . These were first worn at the Stravinsky concerts with the Budapest Festival Orchestra conducted by Iván Fischer. These concerts further enhanced the reputation of Cantemus. To make sure the choir members are warm enough during their winter church performances cosy and smart lined black jackets for the women now complement the dresses.

The conductors’ style of dress always matches that of the choirs. Dénes Szabó has  many different coloured waistcoats to match the dress styles of his singers to achieve a unified appearance .