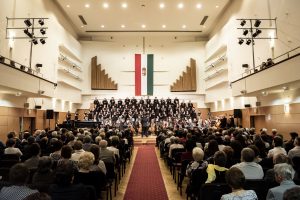 One of the most important prerequisites for the making of a truly good choir is a high quality  rehearsal room.  The 150 seater concert hall of the old Kodály School – designed by Ignác Alpár – had excellent acoustic qualities when we had our rehearsals without an audience.   As the sound produced there was beautiful it gave pleasure for the singers to rehearse which contributed to their improvement. Had the same rehearsals been in a classroom  with very little headroom and desks randomly arranged for sixty children to sit at…. no joy at all!  So whoever may think that that sort of facility is enough to create a good choir is seriously mistaken. (Similarly to sports: even the changing rooms need to be of the highest standard). Having previously said that my choir sounded the best before the audience was sitting in the hall I’d like to add that at concerts when we had a lot of listeners and the choir had to be confined to the space on stage –  standing close to one another –  the musical experience  wasn’t the same.  In those days I didn’t know that I could play special tricks by spacing the singers out using different  spaces in the hall apart from the stage to improve the sound.

One of the first  memorable steps in experiencing an even more beautiful sound was to be allowed to sing in a church, which was not easy to arrange at that time. I recall that  the first occasion for this was a midnight mass in the Nyíregyháza roman catholic church. That’s where we had the same experience that we had experienced before in our Kodály Hall – a beautiful sound in rehearsal which ’died’ acoustically in performance due to the large number of people attending the mass and the concert.  Our town in those days didn’t have a hall which could provide  the maximum enjoyment of sound for either the singers or the audience regardless of the conditions. Later, when we started touring worldwide, we had opportunities – especially in Japan – to enjoy performances in really good concert halls. The Ark Hall in Tokorozawa was one of the first examples. 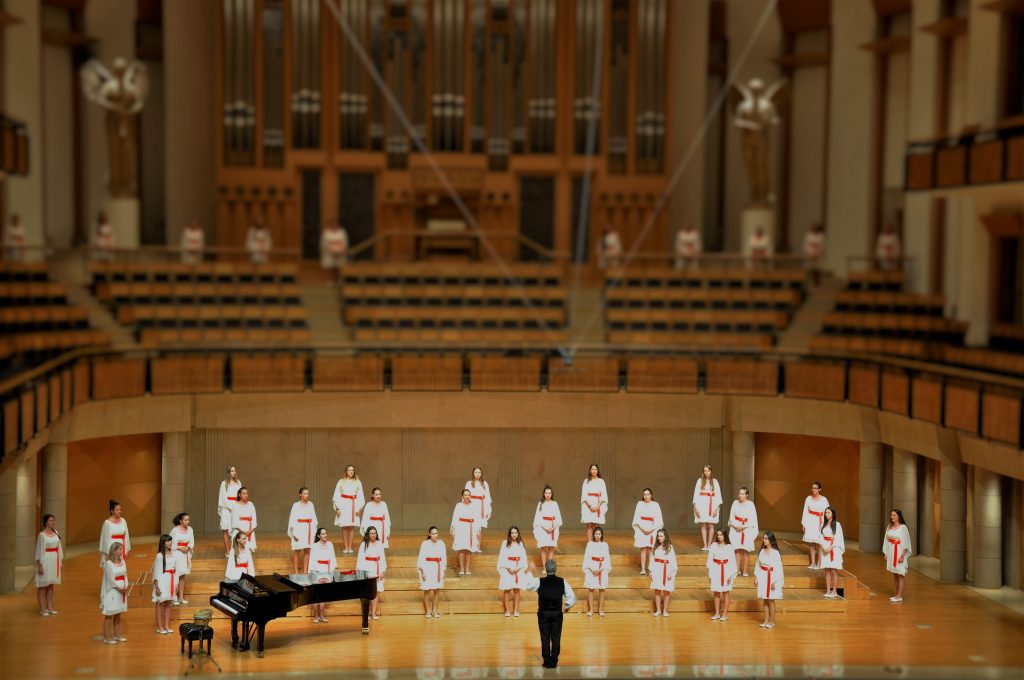 Then came many more with the number of tours growing – the Izumi Hall in Osaka,  the Minato Mirai Hall of Yokohama, the Opera City in Tokyo, the Daegu Concert House in South-Korea, the Hamburg Filharmonie, the Carnegie Hall in New York, the Philharmonie de Paris, the Tchaikovsky 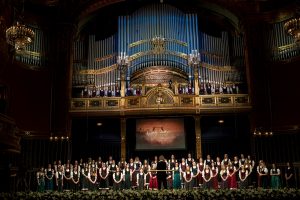 Concert Hall in Moscow and many more. During the years of these tours we also made ourselves at home in the best halls of our own country – the Great Hall of the Academy of Music in Budapest, the Palace of Arts and the Pesti Vigadó –  all places filled with  memories of very good concerts .

At the beginning of the new Millenium we had a big change in our life when the Kodály School was given a newly built facility designed by the award winning architect Tibor Balázs. Our new school includes a concert hall with excellent acoustics. By the time of the move I had also worked out how to use and vary the use of available spaces for the choir to produce the best sound for each piece. To aid that knowledge many modern concert halls also provided options for adjusting the acoustic conditions  based on the sound the choir was producing during rehearsals.  Now  the time has come for me to make the confession that it wasn’t really me who  invented the trick of ’how best to place the singers for the best sound in any given space’. It happened by accident. If my recollection is correct we begged our choir chaperones to let us visit a church in Brno in the Czech Republic, which was not at all a welcome request in those days of the Communist era. It was there where the girls started singing spontaneously  – everyone standing randomly  scattered about in the space. I was just listening and was completely taken aback by what I heard . It was a ’Eureka’ moment. However, it wasn’t the first time when I heard spontaneous singing. It had happened before in the old Kodály School in the form of ’stairway concerts’ when after a year group concert the children carried on singing together in the entrance hall. Our old pupils who returned to our school at concert times to listen to their younger siblings or re-live their memories never missed these opportunities to sing together. That’s how the Pro Musica Girls’ Choir was eventually born. The girls who happened to be there that day started singing Kodály’s Whitsuntide without any warm up or rehearsal. I didn’t even lift a finger and those girls performed that piece better than the winners of the Debrecen International Choir Competition the year before.

For the interviewer the ’stairway concerts’ were true revelations and will always remain so. Not being one of them at the time – as it was only my younger brother who was a Kodály School pupil –  I was a mere onlooker as part of the family for whom it was compulsory  to watch the little one on those occasions. During those times     – when I was standing there amongst the other children  –  I felt  secretly involved in the special thrill which was and remains a natural part of Cantemus singers’ lives.